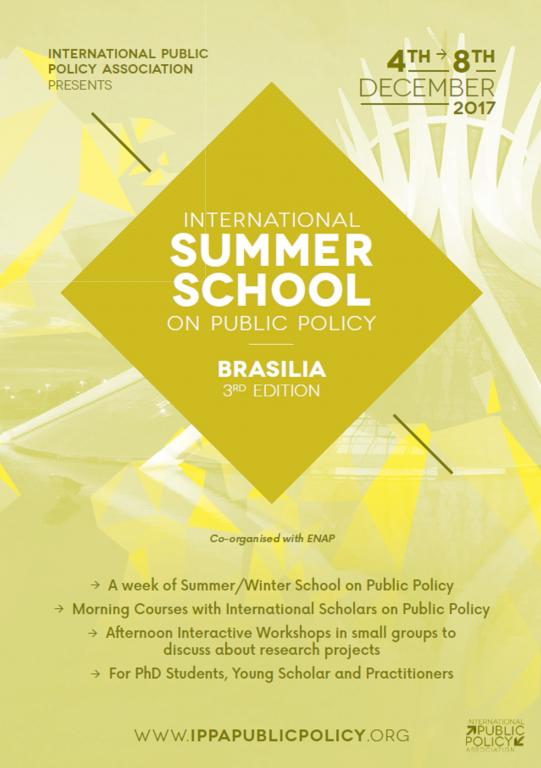 "It's a fantastic experience because you have the opportunity to attend lectures with famous professors in the area, exchange experiences with other researchers and practitioners in order to form a network. I recommend and I really want to participate in the next editions." Lia Almeida, participant of Summer Schools in Brasilia

"It was an amazing experience, mainly because I knew some interesting people and ideas. This activity was important for my research. The conferences were very innovative." Maria da Glória Santos Laia, participant of Summer Schools in Brasilia

Following the success of the first and second editions of the International Summer School on Public Policy - Brasilia held in November 2016 and May 2017 respectively, the Escola Nacional de Administração Pública (ENAP) and the International Public Policy Association (IPPA) have come together for a third edition. This event will take place from December 04-08, 2017 in Brasilia (Brazil).

The main objective of this International Summer School was to provide advice and knowledge on public policy theories, concepts, and methodologies in policy analysis. Lectures in the morning were alternated with workshops in the afternoon. Four workshops (each composed of a small group of 20 students maximum) were conducted by an internationally renowned scholar. One group was composed of Ph.D. students and young researchers and two groups were exclusively composed of policy practitioners.

The Summer School Program provided them with an opportunity to present and discuss their project within a small group. This was the best way to explore and test their research problem, their methodology, and their hypothesis. Each participant received approximately 30 to 45 minutes to present his or her project which was discussed by an international scholar and by other Ph.D. students participating in the group. Consequently, participants discussed each other's projects during the research workshops.