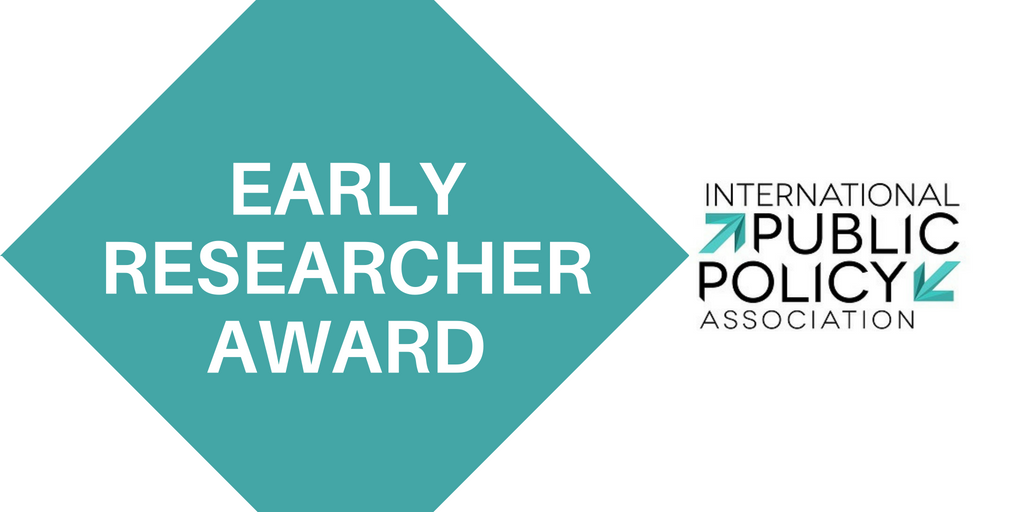 The IPPA Early Researcher Award is awarded biennially to a scholar who, within seven years of completing the PhD, has published a single-authored monograph that represents a major theoretical, methodological and/or empirical contribution to the field of Public Policy and/or Public Administration.

The 2019 Early Researcher Award has been officially presented at ICPP4-Montreal 2019, where a panel has been devoted to the winner’s work. The successful nominee was determined by a Jury established by IPPA.

The members of the jury for the Early Researcher Award 2018/19 are:

Philipp Trein is a Postdoctoral Researcher in Political Science and Public Policy at the University of Lausanne and a Senior Fellow at UC Berkeley’s Institute for European Studies. His research interests cover comparative public policy, comparative and European politics and economic voting. His book Healthy or Sick? Coevolution of Health Care and Public Health in a Comparative Perspective (Cambridge University Press, 2018) analyzes the relationship between curative and preventative health policy. He currently works on a research project that compares the coordination and integration of policies, in environment, migration, public health, and employment policy. His other research deals with policy learning, problem-solving in multilevel governance, the politics of the global financial and economic crisis in federal states, and economic voting in Germany during the 2007-09 financial and economic crisis. Further information about Philipp can be found here

Osmany Porto de Oliveira is Assistant Professor of International Relations in the Federal University of São Paulo (Unifesp). He holds two PhDs in Political Science. He received a PhD from the Université Sorbonne Nouvelle (2015), with the highest distinction, and a PhD from the University of São Paulo (2013). He received his B.A in International Relations from the University of Bologna, Italy (2006), and his M.A in Sociétés Contemporaines from the Université Sorbonne Nouvelle (2008). He won the award of best young researcher at the VII CEISAL Congress in the University Fernando Pessoa, Portugal (2013). He publishes in Portuguese, English, French and Spanish. His main books are “International Policy Diffusion and Participatory Budgeting: Ambassadors of Participation, International Institutions and Transnational Networks”, Palgrave McMillan (2017) and "Le transfert d'un modèle de démocratie participative: Paradiplomatie entre Porto Alegre et Saint-Denis" (2010), Éditions IHEAL/CREDA. His research areas are public policy, international relations, policy transfer and participatory democracy. He organized in São Paulo the International Conference on Policy Diffusion and Development Cooperation (2018), which received participants from 22 countries. He was visiting researcher at the Istituto de Estudios Peruanos, Lima (2013) and visiting fellow in the Institute of Development Studies, University of Sussex (2018), Brighton.

In his book “International Policy Diffusion and Participatory Budgeting”, Osmany Porto de Oliveira analyzes a policy innovation that originated in Brazil and then spread regionally and globally.

The author develops a conceptual framework in which he stresses the role of policymakers in Brazil as well as that of international experts as diffusion agents, or, to quote, the “ambassadors of participation”. Porto de Oliveira argues that these actors have used their skills and resources to stabilize participatory budgeting in the Brazilian system and subsequently to help its diffusion to other countries.

What is remarkable about this book in conceptual terms is the author’s ability to provide a compelling micro-level perspective to a phenomenon that is typically studied at the macro level where sets of countries are examined. The book offers important insights into how the diffusion of participatory budgeting at the subnational level prepared the ground for its broader diffusion, thereby linking the concepts of vertical and horizontal diffusion.

While the conceptual innovation is already an important asset, the comprehensive original data complements the analytical rigor of this research. This book is an instructive and enjoyable read. It is directed to any public policy scholar keen to learn about a successful policy diffusion process that begins in a transition economy and reaches advanced market economies such as Germany, where participatory budgeting is practiced today.

What Osmany Porto de Oliveira shows is that at the end of the day, successful diffusion depends on individuals, a message that transcends the public policy community.

The monograph “Healthy or Sick?” by Philipp Trein poses a supposedly simple question, but offers a theoretically well-informed answer that draws on rich empirical data.

The objective of this book is to explain how two subsectors of health policy (co-)evolved, namely health care and public health. While public health is about preventing diseases, health care concerns the measures taken (and financed) to cure diseases. Despite the logical connection between these two subsectors, this monograph represents the first attempt to model this connection by using policy-analytical tools.

Empirically, the study concentrates on and compares five advanced democracies: Australia, Germany, Switzerland, the United Kingdom, and the United States. This set of countries shares some commonalities, but more importantly important differences that offer intriguing insights. Trein invests greatly in providing a historical analysis of how the two subsectors (co-)evolved.

He argues that the strong connection between public health and health care results from two factors: first, the involvement of the government and the centralization of the health policy, and second, the campaigning of professional organizations that consider preventive and non-medical health policy as important. This book has two evident strengths, which make it a valuable read.

First, Trein walks the reader through the extensive but fragmented body of research on policy integration in order to develop a coherent theoretical argument.

Second, the in-depth analyses of the five countries draw from original data and convey an encompassing picture of how the two subsectors developed over time.