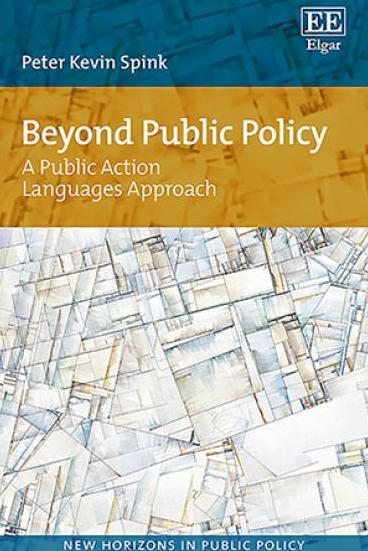 Public policy is an expression that has come to dominate the way people talk about doing government and public administration and is seen as a central component of the modern democratic order. Adopting an innovative ‘public action languages’ approach, Beyond Public Policy shows how policy is only one of many powerful social languages (budgeting, planning, rights, directives, and protests, amongst others) used to make things happen in the ever-changing arena of public affairs; where they may cooperate, compete, or just go their own way.

‘The language we use shapes and limits our understanding of the problems we face and the solutions we can imagine. In this elegant and insightful book, rich with historical byways and international perspectives, Peter Spink reflects on how the currently dominant discourse of “public policy” molds our perceptions of possible answers to social problems. This insight is particularly welcome as social movements, community organizations, migration flows and many other forces – all outside the realm of government – influence public actions and institutions.’

‘Contentious debates on the role of government – who controls government and for what purpose do governments act – are heard around the globe. Peter Spink's book provides a lens, that of public action languages, for understanding the socially-constructed languages of government and applies it to a remarkable range of important historical moments in Europe, the US and Latin America. This highly original and unique approach recognizes the existence of multiple social actors with different levels of power, interests, and agendas and that the outcomes of these disputes become embedded in the language of government.’

‘Peter Spink brings a fresh approach to the study of governing. With a background in social and organisational psychology rather than political science, he asks not “how does the government pursue its objectives through policy?”, but “how are our shared concerns governed, and how does thinking of these in a language of “policy” affect they way that they are addressed?” He frees the discussion of policy from its base in contemporary Western practice, and takes the discussion from the rules of forest access that were recognised in (not created by) that foundational exercise in public policy, Magna Carta, through the TVA and Alinsky’s Rules for Radicals to the complex governing of place in urban Brazil, and shows how “policy”, as an action language, becomes part of the governing. This is a book to stimulate the imagination of anyone interested in how we are governed.’