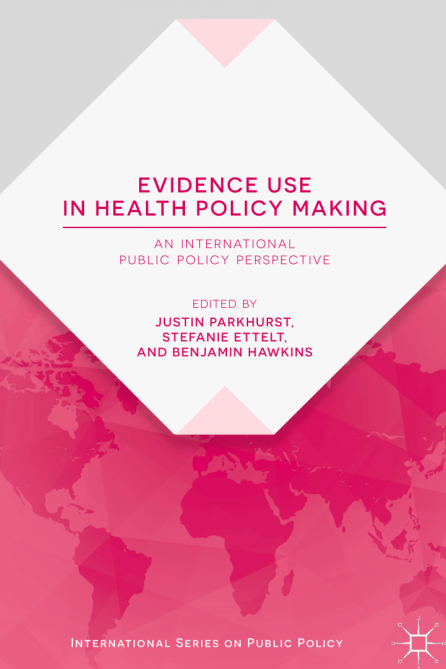 This open access book provides a set of conceptual, empirical, and comparative chapters that apply a public policy perspective to investigate the political and institutional factors driving the use of evidence to inform health policy in low, middle, and high income settings. The work presents key findings from the Getting Research Into Policy (GRIP-Health) project: a five year, six country, programme of work supported by the European Research Council. The chapters further our understanding of evidence utilisation in health policymaking through the application of theories and methods from the policy sciences. They present new insights into the roles and importance of factors such as issue contestation, institutional arrangements, logics of appropriateness, and donor influence to explore individual cases and comparative experiences in the use of evidence to inform health policy.

Justin Parkhurst is Associate Professor at the London School of Economics and Political Science (the LSE)’s Department of Health Policy, UK. He has conducted research on a range of global health policy issues and on the politics of evidence. He served as the Principal Investigator of the GRIP-Health programme of work.

Benjamin Hawkins is Associate Professor at the Department of Global Health and Development, London School of Hygiene and Tropical Medicine, UK. His research focuses on the role of research evidence and corporate actors in health policy making. In addition, he works on European integration, multi-level governance international trade and political economy approaches to health policy.

Stefanie Ettelt is Associate Professor at the Department of Health Services Research and Policy, London School of Hygiene and Tropical Medicine, UK. Her work examines the tensions between structure and agency in explaining the influence of evidence and research on policy-making and health system governance, particularly from a comparative perspective.